A royal town and fair town

Montagnac, surrounded by vineyards, radiates from its historic centre, dotted with beautiful properties, a legacy of its flourishing commercial trade.

The AC ending (acum in Latin) of the name Montagnac points to the possible existence of a Gallo-Roman estate on the site of what is now today’s church.

In the Middle Ages, the town acquired ramparts, ditches, five defensive gates and Saint-André church, a 13th and 15th century fortified construction, with a 54.5 m high belfry decorated with 40 grotesques.

The old dwellings, in the shaded streets, in Montagnac’s historic centre, are proof of a flourishing economy.

Saint-Louis purchased the town in the 13th century and in 1234 Montagnac obtained the status of a Royal Town; the town enjoyed certain royal privileges and started to organise fairs which brought it considerable wealth.

In the 14th century, thriving fairs, like those held in Pézenas, led to the construction of some noteworthy buildings with remarkable architectural detailing.

Take a stroll through the typical back streets and explore the magnificent town houses with their imposing doors. They were equipped with “lojas” old shops or storerooms that foreign traders, from France and elsewhere, used to sell sheets, wine, wool etc.

Montagnac has retained this trading tradition which you can still today at the large, Friday morning market which sells a range of regional products. Stop over and soak up the Mediterranean atmosphere under the ancient sycamore trees along the esplanade. 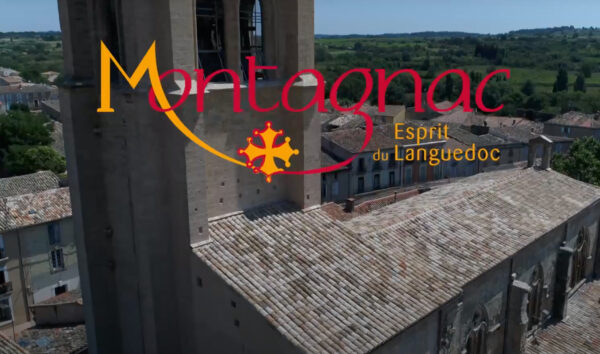 Montagnac, a major Protestant stronghold, was affected by the wars of Religion. The prosperity, associated with the fairs, gradually came to an end. In the 19th century, wine production brought wealth back to Montagnac, continuing up until the 1907 crisis.

Cross the esplanade and stop off at the Espace De Vins en Découvertes (Wine Discovery), the starting point for your visit where you’ll learn about 26 centuries of vineyards and wine history.

You can still see many winegrowers’ houses in the areas around Montagnac; have a stroll around and admire the houses adorned with decorative vines and vast gates opening onto magnificent urban estates.

Do you want to taste some of the wines and learn a bit more? The one-hundred-year-old “Les Vignobles Montagnac” wine cooperative welcomes visitors to its winery for a tasting session; alternatively, you can head to the estates to meet the wine-growers.

A closer look at land of art and nature

The “Terroir d’Art et de Nature” (Art and Nature) wine-tourism trail, was voted “Hérault’s most beautiful hiking trail,” in 2017. Slip on your trainers for a 16 km hike and discover the 14 vast statues set up alongside the vineyards. Admire the magnificent landscapes, inhale the scent of the sweet garrigue and try a sip of Picpoul at “Les vignobles de Montagnac” winery on your return. A beautiful walk that you’ll remember for a long time!

La boule ronde (the round ball)

As you approach Montagnac, coming from Mèze, along the D613, you’ll see an attractively shaped, cylindrical stone building, comprising a dome and a ball. Keep your eyes open …. What is it?

It is a water collecting station, built in 1657, at the behest of the Consuls. It helped address the water shortage in the village in summer by collecting water from a dozen springs which was then transported via underground channels to the town’s main water fountain. Time for a photo opportunity!

How to get here? Find out more

Why come? Find out more

Our brochures on “Montagnac”